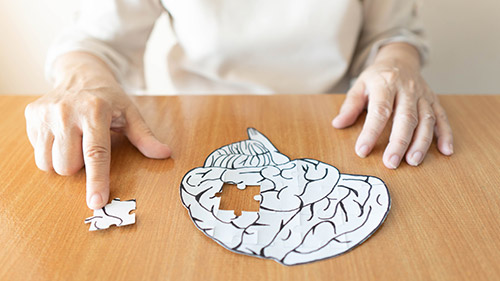 A funny thing happened at a memory care resident’s family home while having dinner with their dear friends. They entertain this couple often for dinner and consider them best friends. While telling a story about a funny moment the four of them had in the past, this family member drew a blank and momentarily forgot their dear friends’s first name. “And that’s when, ugh, you know…what’s your name again?” of course drew chuckles from all and the story went on.

The point here is that a perfectly healthy brain routinely hits speed bumps along the way. The fact that this person in the emotion of the moment forgot a dear friends name is nothing other than a source for laughter and some future good-natured ribbing. That is unless it’s not. Which brings us to the purpose of today’s blog. What exactly are the signs that one might be transitioning into some stage of significant cognitive decline? Today we answer that.

During the early Alzheimer’s disease stages, the patient might experience very mild symptoms broadening it to general forgetfulness. These signs and symptoms of Alzheimer’s may include planning troubles, forgetting the placement of daily use items, problems in managing ﬁnancial decisions, troubles in performing tasks at work, and inability to recollect as well as judge places and distances. The time span of this stage is between 2 years to 4 years.

Before Alzheimer’s disease symptoms appear, there are changes in the brain related to Alzheimer which are noticeable. This begins 10-15 years before the onset of Alzheimer which is referred to the pre-clinical Alzheimer disease. It is important to notice any minor signs of forgetfulness.

During this stage, the patient’s condition might start looking a bit more prominent such as the patient can experience forgetfulness of personal past, unable to remember the address or phone number, personality changes and might not even be able to recall the day it is. The duration of this stage can be anywhere between 2 years to 10 years.

A person’s routine is disrupted, and they are unable to do simple tasks on their own and require assistance. This stage can last many years and goes beyond memory loss and aﬀects the cognition outside the memory including language and calculations. This makes it more problematic to complete daily tasks. This stage would also include them forgetting minute details of who they are married to and who their family members are.

The memory from the distant past tends to be better than recent memory of day-to-day tasks, whom they met and what they spoke about. They could experience restlessness and experience changes in sleeping patterns including sleeping during the day and staying awake at night. They might experience personality changes and act suspicious or feel lost in gatherings amongst familiar people. Read on to know more about Everything You Need to Know about Alzheimer's Disease.

The increased dependence on people starts at this stage where performing day to day tasks is an issue, but they forget people who are important to them. they might not know what to do when the doorbell rings, when the phone rings or if there is a ﬁre and a ﬁre alarm goes oﬀ.

Leaving them alone becomes dangerous and it is best they have assistance as they are communicating but not in a speciﬁc context to have a conversation or are unable to communicate what they are experiencing. The brain cells deteriorate considerably, and motor skills are not properly functional.

So, there you have it. This should put that story-telling family member’s mind at ease because occasional forgetfulness is a common human trait and most often not associated with cognitive decline. But if anything in this blog post raises more questions than answers, stay tuned for next week’s blog post where we’ll talk about diagnosing Alzheimer’s and other forms of dementia. Of course, if you have questions don’t wait a single moment. Know that the caring professionals at Manor Lake Assisted Living and Memory Care here in Hiram are ready to address any need or concern.